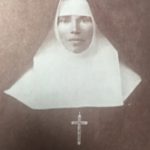 Nun and Martyr Sister Olympia (Bida)[taken from the booklet “Church of the Martyrs – The New Saints of Ukraine”.
General Editor Oleh Turij – Lviv, Ukraine, St. John’s Monastery, Publishing Division Svichado, 2006]
Nun and Martyr Sister Olympia (Bida) was born in 1903 in the village of Tsebliv, Lviv Region.  At a young age she entered the congregation of the Sisters of Saint Joseph. In 1938, she was assigned to the town of Khyriv where she became superior of the house.  After the establishment of the Soviet regime she and the other sisters suffered a number of attacks on the convent. She, nevertheless, continued to care for the children, to catechize, to organise underground religious services (often without a priest).  In 1950, she was arrested by soldiers of the NKVD (KGB) and taken to a hard labour camp in Boryslav. Eventually she was sentenced to lifelong exile in the Tomsk region of Siberia for “anti-Soviet activities”. Even in exile, Sr. Olympia tried to preform her duties as superior.  She was a support for her fellow sisters.  She patiently endured inhuman living conditions.  She died a martyr’s death on January 23, 2016.

{from Sister Olympia’s letter to her provincial superior, Sister Neonylia}
“God Almighty, God’s Providence will not allow His little children to perish in a foreign land.  For He is with us here, in the midst of these forests and waters. He doesn’t forget about us . . . Because of our faith, because of a divine matter, we suffer, and what could be better than this? … Let’s follow Him bravely.  Not only when all is well, but even when times are bitter, let us say: Glory to God in all matters.”